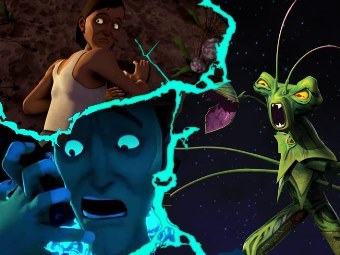 This is why you should always use thick gloves when gardening around mutagenic ooze weeds.
"This was back in the day when science goo could just do anything! You could make up the most absurd reasoning, that has no scientific logic, but, it's science goo! So it flies."
— The Nostalgia Critic on Teenage Mutant Ninja Turtles
Advertisement:

This is any liquid/slime/sludge form of Applied Phlebotinum that causes living creatures that touch it to somehow mutate or transform into... something else. Occasionally, it may need to be ingested (or injected) to take effect, but in most cases it can be easily absorbed through the victim's skin — their own LEGO Genetics will take care of the rest.

The goo comes in many forms — it may be nuclear waste, some form of alien bodily fluid, mud from a cursed swamp, or contaminated water carrying The Virus. Once mutated, sometimes the characters/monsters become Radiation-Immune Mutants in relation to the mutagen, though not always, and repeated exposure can prove increasingly harmful.

Common results include Body Horror, Painful Transformations, and Lovecraftian Superpowers. However, it's also a fairly common backstory for non-Squicky superheroes.

Differs from Super Serum in that the effects of this are usually unexpected and nearly always unwanted. Likely to be either Ominous Obsidian Ooze or a Technicolor Toxin.