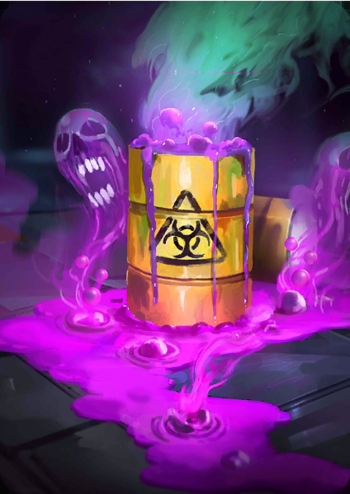 "Watch out! A pOIsonous barrel!"
Nami: The smoke's almost to us!!
Usopp: Look at the creepy color! It must be incredibly toxic!!
— One Piece
Advertisement:

In Real Life, poison is usually detected and identified thanks to its bitter taste and/or smell. But how can we identify a poison as such in visual mediums, where taste and smell aren't an option?

Of course, the color itself!

Eastern media tend to portray poisonous substances in a dark purple color, usually bubbling. In Western media, Sickly Green is more common because of the former popularity of arsenates, which really are fluorescent green. There are also other works from both sides of the Atlantic showing poisons and venoms of various other colors.

It may be shown melting stone and steaming foul vapors.

Thanks to these distinctive colors, the audience can instantly perceive whether a substance is toxic or not. There are instances of this being Truth in Television, as shown below - especially when dealing with organic poisons, where signaling to predators that a particular plant or animal is poisonous is necessary for the poison to provide protection.

Seen often paired with Poisoned Weapons, Poisonous Person and Perfect Poison. See also Sickly Green Glow for that iconic pop culture depiction of radiation, Purple Is Powerful for strong things connected to the colour purple in general, and Purple Is the New Black.