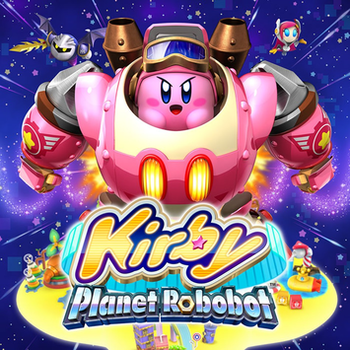 Kirby: Planet Robobot (known in Japanese as Hoshi no Kirby: Robobo Planet) is another installment in the long-running Kirby series for the Nintendo 3DS, released in Japan on April 28, 2016, in Europe and North America on June 10, 2016, and in Australia on June 11, 2016.

Another peaceful day in Dream Land has been interrupted yet again, this time by the invasion of the Haltmann Works Company, an army/Mega-Corp of technologically advanced aliens that seek to mechanize Kirby's home planet. As usual, it's up to our heroic pink puffball to set things right and prevent the invaders from taking over Planet Popstar.

Gameplay remains similar to previous installments (mainly Kirby: Triple Deluxe), with the addition of three new Copy Abilities: Doctor, Poison, and ESP, and a new vehicle for Kirby: the Robobot Armor. After hijacking it from the invaders, Kirby can use it to tear through obstacles and enemies. It also shares Kirby's innate Power Copying ability by being able to scan enemies to gain "Modes", expanding its versatility. Multiplayer is included via the new Team Kirby Clash RPG-like mode, which lets up to four Kirbys team up against extra-tough bosses by using one of four special abilities that level up as they are used. Also present are "Kirby 3D Rumble", a special 3D minigame, and "Meta Knightmare Returns", a time attack mode starring Meta Knight. In 2017, Team Kirby Clash and Kirby 3D Rumble both received standalone sequels as Team Kirby Clash Deluxe and Kirby's Blowout Blast.

amiibo functionality is also included in the game. While playing, tapping an amiibo to the system allows Kirby to inhale it and gain an ability. Certain amiibo will always give Kirby the same ability, and the game launched alongside a new Kirby amiibo line, which can unlock special costumes and an exclusive ability depending on the amiibo figure you use.

Most of this stage takes place in a casino-themed area.

Most of this stage takes place in a casino-themed area.