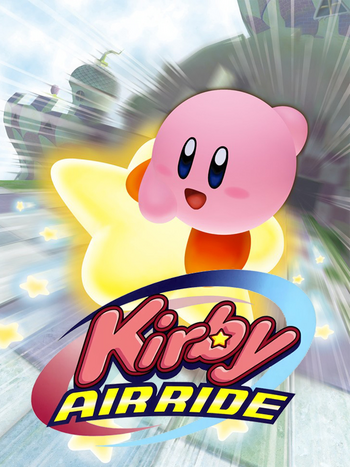 Kirby's one and only title on the Nintendo GameCube, Kirby Air Ride (or Kirby's Airride in Japanese) is a multiplayer Mascot Racer that supports up to 4 players, or 8 with LAN support. It was developed by HAL Laboratory and directed by Masahiro Sakurai that was released in 2003. It was the last Kirby game Sakurai worked on before his departure from HAL (and, for a while, Nintendo as a whole).
Advertisement:

Kirby Air Ride is somewhat similar to Mario Kart, Nintendo's main Mascot Racer series, being a racing game that allows players to attack one another to impede their rivals' progress. However, unlike Mario Kart, you do so in the traditional Kirby way: utilizing various Copy Abilities that are obtained by swallowing the enemies that litter most tracks. The controls are also very simple; acceleration is automatic, leaving the A button and control stick to be used as the only methods of input for all actions.

The game has three different modes:

Kirby Air Ride was notably the last game in the Kirby series that Sakurai worked on before departing from HAL Laboratories a month after the Japanese release, having been hit with Artist Disillusionment over constant pressure to continue making Kirby sequels. Sakurai would be involved with the series one last time after his departure, acting as an advisor to the Kirby & the Amazing Mirror developers, but would never return to any position of involvement again, much less the director's seat.