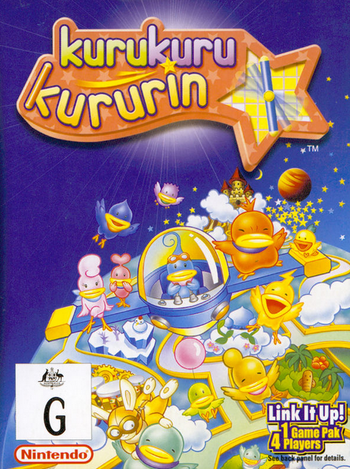 Kuru Kuru Kururin is a Puzzle Game developed by Eighting for the Game Boy Advance, released in 2001.
Advertisement:

In the game, you control a little bird called Kururin in his stick-shaped helicopter, appropriately named "Helirin", in a quest to save your siblings. Yes, it's that kind of game.

The gameplay consists of maneuvering the ever-rotating Helirin through many narrow passages, moving obstacles and stationary turrets. In the story mode, you need to steer your Helirin through 10 stages (with names like Cake Land, Star Land and Cloud Land), each with three levels that you need to finish in a linear fashion. Then there's the Challenge Mode, which has 50 very short challenge levels that are appropriately very difficult.

The game also has two sequels that appeared only in Japan: Kururin Paradise (GBA) and Kururin Squash! (GameCube).

Even though the series was generally exclusive to Japan, the first game came out in Europe and was also released on the Wii U Virtual Console in North America in February 2016. In addition the Helirin appeared as an Assist trophy in Super Smash Bros. Brawl.