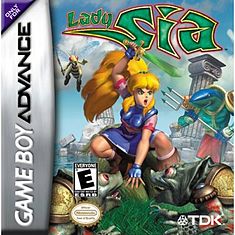 An Action-Adventure platformer for the Game Boy Advance released in 2001.

The eponymous heroine is a warrior princess who needs to defeat an invading force of anthropomorphs called the T'soas, created by a warlock named Onimen. She travels through four areas, each with several levels, as she retrieves her stolen sword and magic ring, re-forms alliances with the leaders of the elemental realms of fire, air and water, and continues on her quest to remove Onimen from her palace.

Also of note is Sia's shapeshifting abilities; in three out of four major boss battles, she transforms into a humanoid beast with claws, superhuman strength, and a mane of hair. Why? Rule of Cool, probably.

Not to be confused with Sia the musician.