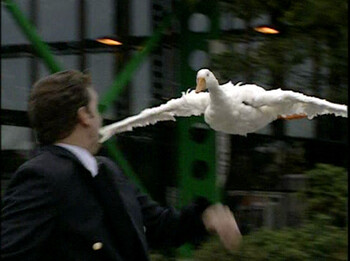 Mess with the honk, you get the bonk.
"Geese hiss, bite, and give chase to things they are supposed to be afraid of. Geese are derelicts and freeloaders, sullying our subdivisions and parks with their feces and feathers. Geese, we seem to have collectively decided, are complete dicks."
— Gray Chapman, How Geese Became the Assholes of the Sky

Sometimes, waterfowl are portrayed as animals that are beautiful and serene as they glide along the surface of a lake, or as silly and comical animals in case of ducks.

This is not that.

Sometimes, waterfowl are portrayed as hyper-aggressive and/or total dicks towards others. Usually, it involves swans and geese, but the portrayal of ducks as selfish and temperamental in The Golden Age of Animation would also fall under this. There is a bit of Truth in Television to this: geese and swans are naturally very territorial, and they will mess up anything they see as a threat. So, of course, if a human walks by and seems to challenge their authority, that human is, simply put, totally ducked. Geese in particular have a tendency to barge in on human settlements, leading to inevitable conflict.

Geese are the most likely to receive this treatment. While smaller than swans, they're just as ferocious and more commonly seen in everyday life (thanks to the aforementioned intrusion on human territory), but don't have the beauty and elegance to cancel it out. Geese also tend to be more consistently hostile towards humans compared to swans, which tend to only be particularly aggressive towards people while raising their offspring, as swans are known for their protectiveness. Geese also tend to gather in large groups, increasing the odds that they'll outnumber any humans encountering them. Additionally, while serrated tongues are common among waterfowl as a means of breaking up food (since they don't have teeth), their presence on geese factors into their image as more menacing than most other common birds, with people frequently describing geese as having "teeth on their tongues" to invoke feelings of Body Horror.

This is also not getting into the horrific reproductive habits ducks engage in, which have earned them quite a lot of internet infamy.

Subtrope of Feathered Fiend. Contrast Swans A-Swimming, a much more peaceful view of waterfowl. Can overlap with Quacking Up if you got an Unsympathetic Comedy Protagonist, or Noisy Duck if the duck is loud. Compare Cocky Rooster for another domesticated bird with a similar stereotype.

The Canadian geese, Alice and Chloe often ridicule Blu for being an acrophobic, tame bird though overall they are mostly just a nuisance with Blu being seemingly more annoyed with their behavior then upset.

The Canadian geese, Alice and Chloe often ridicule Blu for being an acrophobic, tame bird though overall they are mostly just a nuisance with Blu being seemingly more annoyed with their behavior then upset.