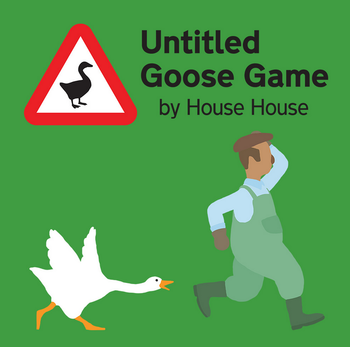 HONK!
It's a lovely morning in the village, and you are a horrible goose.
Advertisement:

Untitled Goose Gamenote according to the developers, it officially has No Title is an Adventure Game developed by House House for the Nintendo Switch and PC (via the Epic Games Store as an exclusive, and then released onto Steam a year later) on September 20, 2019, and PlayStation 4 and Xbox One on December 17, 2019. You play as a goose who wanders around a sleepy unnamed English village doing various goose things and being a general nuisance to any nearby humans.

The gameplay involves some light problem-solving and stealth, and you have a dedicated honk button.

The launch trailer is here

. The PlayStation 4/Xbox One announcement trailer is here

A free update which added a local two-player mode was released on September 23, 2020. On the same day, the game was also released on Steam and itch.io. Update trailer here