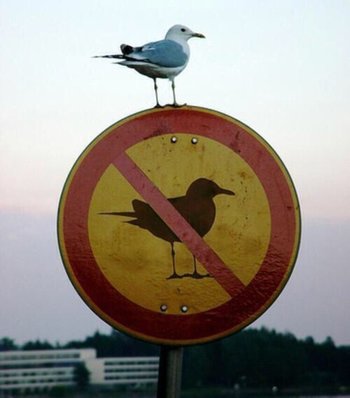 You can't tell me what to do — because I don't even know what it means!
"Sign, sign, everywhere a sign
Blockin' out the scenery, breakin' my mind
Do this, don't do that
Can't you read the sign?"
— Five Man Electrical Band, "Signs"

A humorous trope in which a posted sign or spoken warning against an action is so precise that you just know that the characters will do exactly that, or just have.

Not to be mistaken for Schmuck Bait, where the sign is the source of temptation. Instead, this trope forbids something that the characters were going to do anyway, or didn't realize was forbidden; often they take no notice of the sign.

Compare Not Cheating Unless You Get Caught and Rules of the Road. Overlaps with I Warned You if the person pointing out the sign is the one who posted it in the first place. For the sub-trope related to barring animals from places of interest see No Animals Allowed.

Example of:
No Animals Allowed