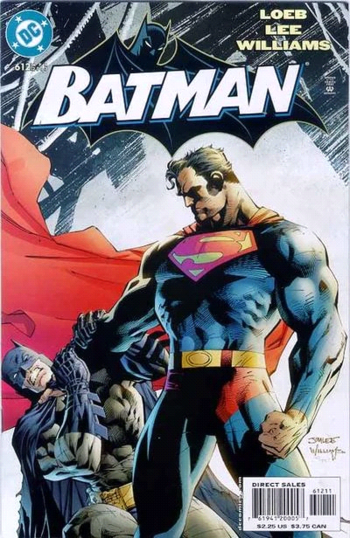 Looks like someone's been over the line, isn't it Superman?
Advertisement:

In modern English, "antagonize" means something like "to harass" or "annoy", and is usually negative in tone. Its original meaning, however, was something more akin to "opposed to"; and "antagonist" uses this original meaning — the "antagonist" of a story is simply "whoever is working against the main character", regardless of them being the villain... or The Hero.

A Hero Antagonist thus opposes the main character, but their objectives are usually things like Saving the World, foiling evil plans, helping the helpless, and otherwise working For Great Justice.

Usually, a Hero Antagonist's main concern is that The Protagonist is going to end up hurting someone, something, or bring about The End of the World as We Know It, which may be completely correct (whether because The Protagonist is a card carrying, moustache-twirling villain or just an Unwitting Instigator of Doom), or misinformed as to the nature of their enemy. In a Good Versus Good story, the antagonist might become less "opposed to" and more "competing against". In any of these events, the Hero Antagonist is able to keep their good alignment while still being the narrative's opposition. If the opposition is strictly in a game or a sporting event they even be a good case of Opposing Sports Team.

Can be related to Rousseau Was Right depending on the type of Hero Antagonist in question. Often overlaps with Villainous Valor. Sometimes related to My Country, Right or Wrong. Inspector Javert is often a Sub-Trope, as is its mentally healthier cousin, Sympathetic Inspector Antagonist. If the protagonist is a Well-Intentioned Extremist, their antagonist will often be a Knight in Sour Armor. Settings with White-and-Grey Morality will favor these.

Compare the Knight Templar, whose devotion to good ideals has become unreasoning fanaticism and he refuses to see how evil he is. Often (though not always, depending on how the morality is played in the work) will oppose their inverse, the Villain Protagonist.

If the Hero Antagonist having Noble Profession is revealed to be a malicious figure, then that overlaps with Evil Hero.

Compare Hero of Another Story, Anti-Villain and Designated Villain.

The Wizard dedicates himself to ending the Curse of Eternal Night and saving humanity, this being why Jack was sent to kill him in the first place. Granted, he seems to be in it only for recognition and scientific curiosity, so there is some karma when Jack beats him.

The Wizard dedicates himself to ending the Curse of Eternal Night and saving humanity, this being why Jack was sent to kill him in the first place. Granted, he seems to be in it only for recognition and scientific curiosity, so there is some karma when Jack beats him.