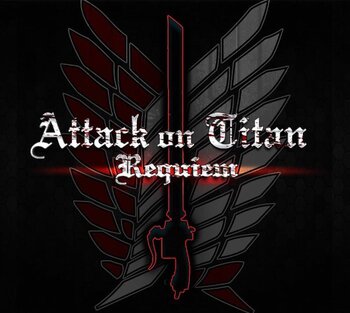 A new beginning is about to be born.
Advertisement:

AOT no Requiem (or Attack on Titan: Requiem) is a fan project which explores an alternate ending to Hajime Isayama's Attack on Titan by rewriting the final three chapters of the series.

It is based on the Akatsuki no Requiem fan theory - a popular, albeit somewhat controversial, theory created prior to the end of the series - which imagines an ending where Eren defeats the Alliance and annihilates all humanity outside of Paradis. The original theory itself is based on an interpretation of Linked Horizon's Akatsuki no Requiem

, the ending song for Season 3 Part One of the anime. Hence the name.

Although Attack on Titan ended up concluding quite differently to what was theorized, the theory continued to be popular among certain segments of the fandom, thus leading to the creation of AOTNR.

Rather than featuring multiple chapters, AOTNR is one long chapter updated in parts. There are currently two parts posted on the official website as of October 2021. You can read them here

Consider supporting the creators on their Twitter linked here

Spoilers for both the original Attack on Titan and Requiem ahead.

Armin: [gesturing to child Eren] If this is your way of showing me you've always been like this... then you're nothing but a slave to your own selfishness!
Eren: If you cannot give up your humanity to do what is necessary, then nothing you say will ever change anything! And all the lives that died for you would have died for nothing!
Eren's response: We’ve always been monsters, Armin. You don’t get to suddenly act like you aren’t.