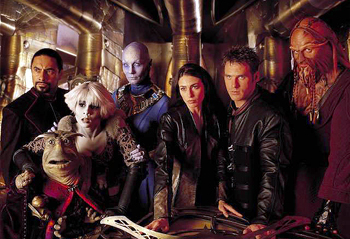 Farscape, created by Rockne O'Bannon (Alien Nation, SeaQuest, Defiance) and Brian Henson (son of Jim), is an Australian-American co-produced space opera. Originally airing on the Nine Network, it became the flagship show on Sci-Fi Channel from 2000-2003.

The series follows John Crichton (Ben Browder), a space-happy astronaut stranded aboard a ship—"a LIVING ship!"—full of alien ex-cons. While en route to Earth, John and the crew find themselves targeted by both sides in an intergalactic war. At the end of the day, the half-mad-and-therefore-half-sane John is able to save everyone because he's the most deficient of all the species aboard.

It was compelling for viewers of that time because of the adult themes. Our "heroes" had more sordid backgrounds and bad habits than usual, and the clean, well-dressed military served as the antagonist. Crichton (a pacifist who would get his ass kicked constantly) would often quibble over the "right" way to do things, but he turned out to be wrong as often as not. To say nothing of the costumes: Whereas Star Trek at times looked like they robbed a fabric store, Farscape went looking in actual fetish shops. War Minister Ahkna's boots were bought from such a store. (And where else are you going to see a naked blue anthropomorphic plant?)

Farscape was perfect for its place and time during the transition from comfy episodic television to more story-driven, serialized stuff—a more notable example being "Eat Me" (pure Gothic Horror without much concession to the fact that it is set in space), where the crew is cloned and each of the clones conveniently die before the end of the episode... except for one, leaving them with two versions of the main character for the rest of the season. It also felt free to kill off main characters, and not everyone survived the full series. The writers nicknamed Season Three the "Season of Death" for a reason.

Another aspect of the series which sets it apart from others was its creativity and dedication to using Practical Effects for almost all of its aliens, creatures, and monsters. The Jim Henson Company went all-in with designing and building Starfish Aliens, right down to the four-armed and appropriately-named Pilot. While prohibitively expensive, the puppeteering allowed them to do things that even modern sci-fi can't. There are plenty of scenes with the crew hugging Pilot, climbing on him or even slightly dismembering him that couldn't be done with CGI.

The premise of Farscape bears some resemblance to the '70s British series Blake's 7. B7 fans see the character of Grayza (Rebecca Riggs) as an acknowledgment of it, judging by her strong resemblance to the older show's Big Bad Servalan. The fact that Riggs is an avowed fan of B7 doesn't hurt. If you're a fan of Guardians of the Galaxy, you can find interviews online where James Gunn says that Farscape was a primary influence. So much so that Ben Browder appeared in Guardians Vol. 2 as a Sovereign.

Season 4 was a bit of a downturn because of Sci-Fi Channel's meddling, and Farscape was cancelled abruptly in 2002. The show ends with The Peacekeeper Wars, a two-part miniseries which chews through the planned, but sadly nonexistent final season at breakneck speed. O'Bannon has also stated that he has had some discussions with the Henson company about a potential film revival, but nothing's come of it as of yet.

A series of books was published by Tor Books.

A mini-comic called "Backyard Barbecue" was included in the 15th Anniversary Edition DVD and Blu-ray release of the series in late 2013 by Archaia Entertainment. It was later included in the Free Comic Book Day comic for 2014.

Wildstorm Comics also published a two-part comic based on the series called Farscape: Warn Torn in 2002, which consisted of a main storyline and a side story. The main storyline dealt with the Moya crew getting involved with two planets that appear to have been with war with one another for generations over a third planet they each believe belongs to them due to a signal they dubbed "the Voice", with the crew discovering the truth behind it in hopes of stopping the war. The side story, The Four Horsemen, followed Chiana after being separated from Moya and finding a group of Nebari refugees who discover they were infected with the same virus that had been given to her and her brother Neri.

This series has its own recaps page.

Scorpius In The Game

With his nemesis loose on Moya, Crichton attempts to trap Scorpius in the buggy VR game he was playing earlier in the episode... only to find that Scorpius can control the simulation at will.

Scorpius In The Game

With his nemesis loose on Moya, Crichton attempts to trap Scorpius in the buggy VR game he was playing earlier in the episode... only to find that Scorpius can control the simulation at will.