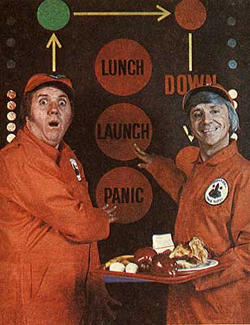 Laurel and Hardy... in space!
"Breakfast. Lunch. I said lunch, not launch!"
Advertisement:

One of the zanier Saturday morning series from Sid & Marty Krofft Productions, Far Out Space Nuts aired on CBS in 1975. Bob Denver and Chuck McCann played Junior and Barney, two NASA janitors who were loading food onto a rocket when a wrong button press launched them into space.

While trying to return to Earth, our accidental astronauts visited various strange planets. On one of those planets, they met a furry creature whom they named Honk (Patty Maloney).

The series wasn't remarkable, but it was entertaining.