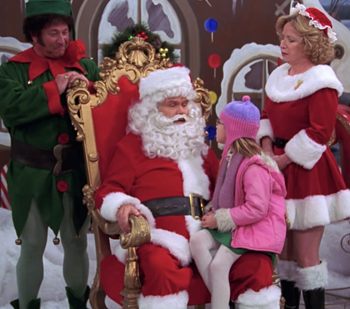 "If you're Santa Claus, why are there so many Santa Clauses at other malls?"
— Michelle Davies, Family Ties, "Miracle in Columbus"
Advertisement:

Usually occurring during the Christmas-themed episode, a male character gets a job at The Mall (or a department store in older works) as Santa Claus, either for a part-time job or as a last-minute substitute. Hilarity Ensues. We invariably see a series of kids on his lap doing things like questioning his authenticity as the "real" Santa Claus, attempting to pull off his beard, asking for extravagant or impossible gifts, or, in the most crass of Sit Coms, urinating on him out of fear (more refined sitcoms might have the kid simply cry out of fear). A common joke has the Mall Santa promising to deliver an outrageous gift come Christmas, much to the dismay of the kid's parents.

If the character playing the Mall Santa is a cynical Jaded Washout/Deadpan Snarker type, he may comment on the materialistic behavior of the kids or the commercialism of Christmas.

Added points if the Mall Santa is drunk.

The female equivalent is being stuck in a Sexy Santa Dress and/or hideous "helper elf" outfit.