Film / Guardians of the Galaxy Vol. 2

All spoilers for this movie will remain unmarked. You Have Been Warned. 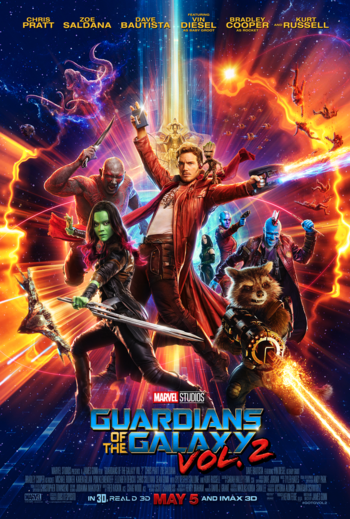 I can still hear you saying you would never break the chain.
Rocket: So, we're saving the galaxy again?
Peter: I guess.
Rocket: Awesome! We're really gonna be able to jack up our prices if we're two-time galaxy savers!
Advertisement:

Two months after the defeat of the villainous Ronan the Accuser, the Guardians of the Galaxy, which consist of Peter "Star-Lord" Quill (Chris Pratt), Gamora (Zoe Saldaña), Drax (Dave Bautista), Rocket (Bradley Cooper) and Groot (Vin Diesel) are riding high on their newfound notoriety, selling their services as heroes for hire. Unfortunately, when they take a job for a race called the Sovereign in exchange for their captive, Gamora's sister Nebula (Karen Gillan), the Guardians end up angering their easily-offended clients and get put on the Sovereign's hitlist. Now the Guardians are on the run from the Sovereign and the team's old Space Pirate enemies / allies the Ravagers, who have mutinied against their boss Yondu Udonta (Michael Rooker) for his softness on his former apprentice Peter, and are now leading the Sovereign's manhunt. And just to complicate matters, Peter's Disappeared Dad Ego the Living Planet (Kurt Russell) has resurfaced, along with Mantis (Pom Klementieff), a protégée of his own.

A sequel, Guardians of the Galaxy Vol. 3, is slated for release on May 5, 2023, once again directed by James Gunn. Gunn will also be writing and directing The Guardians of the Galaxy Holiday Special for Disney+, which will release in time for the holidays in 2022 ahead of Vol. 3's release.note Gunn was originally set to write and direct the movie for a May 2020 release window, but he was suspended from directing the project in 2018 when prior, off-color comments that he made resurfaced, though Marvel kept his script in play. Disney later reversed their decision in 2019 after he apologized publicly and professionally made a case for his return, allowing Gunn to direct on Vol. 3 after completing some work for the MCU's Distinguished Competition in the interim, writing and directing The Suicide Squad as well as working on a HBO Max spin-off, Peacemaker. In between, the Guardians' story was continued in Avengers: Infinity War, Avengers: Endgame and Thor: Love and Thunder, with Gunn consulting on the Guardians' portrayal in each.

, and a Full Trailer

Guardians of the Galaxy Vol. 2 provides examples of:

When Ego reveals that he was responsible for killing Peter's mother, Peter snaps out of his trance at the realization and starts blasting at Ego.

When Ego reveals that he was responsible for killing Peter's mother, Peter snaps out of his trance at the realization and starts blasting at Ego.