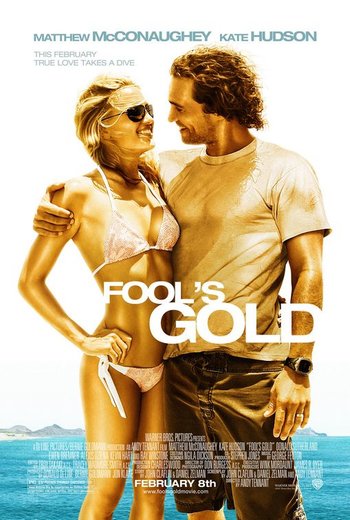 Fool's Gold is an 2008 American adventure-romance film directed by Andy Tennant and starring Matthew McConaughey and Kate Hudson, reuniting them after How to Lose a Guy in 10 Days, alongside Donald Sutherland, Ray Winstone, and Kevin Hart.

Finn Finnegan (McConaughey) is a treasure hunter searching for a sunken Spanish galleon, the Aurelia, that was lost at sea with the 1715 Treasure Fleet. During his search to find the galleon and its treasure, his wife Tess (Hudson) divorces him. Tess has been working as a stewardess on a yacht owned by multi-millionaire Nigel Honeycutt (Sutherland). Finn finds a clue to the location of the treasure and manages to get on Nigel Honeycutt's yacht The Precious Gem and convince him and his daughter Gemma (Alexis Dziena) to join (and finance) the search for the treasure. But Finn's mentor, Moe Fitch (Winstone), and Bigg Bunny (Hart), a gangster, are intent on finding the treasure first.