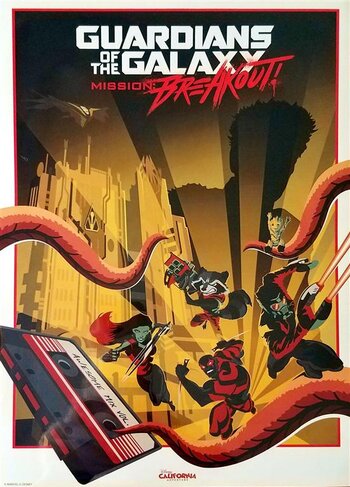 The Collector: (voiceover) My friends, this is the moment you have been waiting for...
Rocket: Yeah, when Rocket unplugs you, and starts things rockin'!
Advertisement:

Guardians of the Galaxy – Mission: BREAKOUT! is a ride at Disney California Adventure based on the Marvel Cinematic Universe Guardians of the Galaxy film series, replacing DCA’s version of The Twilight Zone Tower of Terror. It is the second note the first being Iron Man Experience at Hong Kong Disneyland, which opened four months earlier Marvel-themed attraction at a Disney park since they acquired the franchise in 2009, and opened on May 27th, 2017. As of June 2021, it is now part of a larger Marvel area called Avengers C.A.M.P.U.S..

The Collector has invited guests to view his private collection of priceless artifacts and exotic creatures from all over the cosmos, including his newest acquisitions, the famed Guardians of the Galaxy. During the tour Rocket Raccoon escapes his cage and wrangles the guests into his plans to free his friends by riding the gantry lift to the top of the building so he can turn off the massive generator that's powering the control system keeping all the cages closed. It's a foolproof plan... right?

In 2017, a Halloween overlay was announced, entitled Guardians of the Galaxy: Monsters After Dark. Running nighty during September and October, it features Rocket and Groot as Rocket attempts to rescue Groot after the Collector's facility loses power and all the monsters contained within are set loose.