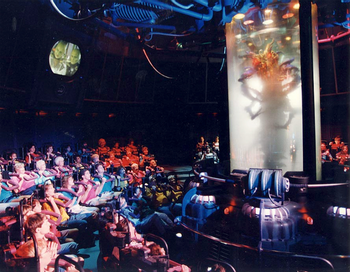 "My dear friends, you've just witnessed a small sample of the awesome power of X-S teleportation. But wait! There's much more. Imagine if the trip were not merely the width of this room, but the breadth of a galaxy! The span of a universe! Well, imagine no more. Because soon one of you will be taking that trip. One of you will seize the future with X-S! Bon voyage!"
— S.I.R.
Advertisement:

The ExtraTERRORestrial Alien Encounter (commonly abbreviated as Alien Encounter by its fans) was a "theater-in-the-round" attraction in the Tomorrowland section of the Magic Kingdom at the Walt Disney World Resort and one of Imagineering's various collaborations with George Lucas. A replacement for the 18-year-old Mission to Mars, it was a darkly humorous science-fiction experience that used binaural sound to achieve many of its effects. It officially opened on June 20, 1995 as part of "New Tomorrowland" and ran until October 12, 2003. It was replaced by the now-defunct Stitch's Great Escape! in 2004.

At Tomorrowland's Interplanetary Convention Center, shady Mega-Corp X-S Tech invites you to a demonstration of their new teleportation technology, however a carnivorous alien is mistakenly beamed into the auditorium and terrorizes the audience.

The pre-show underwent two versions: The original 1994 version (December 16, 1994 to January 12, 1995) was a little more comical and featured T.O.M. 2000, voiced by Phil Hartman. Shortly afterwards, at the insistence of Michael Eisner, the show was reworked to become much darker and Tim Curry replaced Phil Hartman as the voice of T.O.M., now renamed as S.I.R. The ride was not really greatly popular during its run, considering it was an adult-oriented attraction in otherwise family-friendly Disney, but it managed to gain a cult following from a number of Disney World fans who loved the dark, sophisticated, and terrifying atmosphere, which only intensified after its Lilo & Stitch-themed successor opened and got lambasted like there was no tomorrow(land).