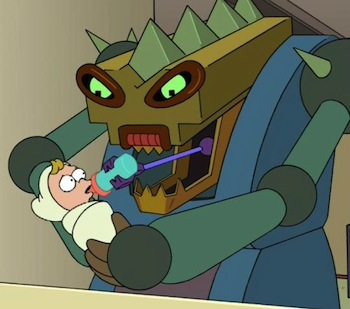 "SLEEP LITTLE DUMPLING. I HAVE REPLACED YOUR MOTHER."
Advertisement:

The Unnecessarily Creepy Robot is deliberately designed to be scary, with little to no regard to its intended purpose. Sure, the characters may say it's only a simple maintenance robot, but does it have to look like a giant mechanical spider? Sure, it's just a mining droid, but does it have to have sinister glowing red eyes? And who gave it a laser, anyway? Why even design a robot that looks like that?

Robots tap into our primal fear of automation. The fear of being replaced and/or destroyed by a machine. And it's all the more dramatic when a robot is scary looking. When your robot snaps and turns on you, it's all the more frightening to be chased by that giant spider, to be stared down by those red eyes, to be zapped by that laser.

The Unnecessarily Creepy Robot can take many forms. It may tap into the Uncanny Valley, being too human-like for comfort. Or it may be vaguely humanoid, but with some addition or subtraction that makes it unsettling. It may also resemble an animal that humans have an instinctive revulsion to, like a insect or a reptile. Or it may have a design so far removed from anything recognizably organic that it makes you wonder how anyone could come up with it.

Whatever the form it takes, the Unnecessarily Creepy Robot has this as its constant: the creepy design is, at best, only vaguely related to its intended function. Given what characters in-universe say it was designed to do, it doesn't have to look like it does. It was meant to be creepy first, efficient second. Because a robot will always run amok, and when it does, it will be all the more terrifying to have it chasing you.

The most extreme types may approach becoming Mechanical Abominations. See Cute Machines for the opposite of this Trope. Super trope of SkeleBot 9000.