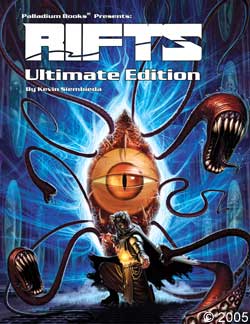 Rifts is a Tabletop Role-Playing Game with a combination of Cyberpunk and Dungeon Punk set After the End and dialed Up to Eleven. Published by Palladium Books.

The planet Earth is ravaged in the late twenty-first century when a... small nuclear war sets off a magical cataclysm that wipes civilization off the face of the earth. As mankind climbs its way from the brink of extinction, it finds that it now shares the world with Elves, Dwarves, Dragons and even stranger alien beings from across dimensions. Many of the ancient gods walk the earth once more, and horrifying demonic and alien beings have staked their own claims on the planet, and many plot to take even bigger pieces of the pie.

In order to protect itself, mankind has taken back the secrets of magic, salvaged and re-discovered past technologies, and slowly rebuilt civilizations all over the world. However, even with monsters, demons, vampires and alien invaders to deal with, Mankind is still its own worst enemy.

Rifts' main selling points are a compelling "everything and the kitchen sink" setting and spectacular artwork. Its critics, however, consider it hampered by its rules. It uses the Palladium System note also called the Megaversal system, developed in the early '80s as Kevin Siembeida's House Rules system for Dungeons & Dragons. As the system hasn't changed much since then it can feel clumsy and unfriendly to players used to more polished modern RPGs. Many gamers purchase the books to convert the stats to another engine (such as GURPS), or to plunder ideas for other games, or simply to read about the setting and admire the artwork. This has earned Rifts the title of "the most popular RPG that nobody actually plays" in many fan circles.

Well over forty World Books and Dimension Books cover nearly every continent (except Antarctica), even going into space and other dimensions, so there is a lot of material to work with.

Generally speaking, each World or Dimension book will feature:

In 2016, a successful Kickstarter campaign was held for an official conversion of the Rifts setting to the Savage Worlds system.

Not to be confused with the MMORPG Rift.

open/close all folders
A-G
Oh, 'Debt Collector' has such an ugly ring to it. Please think of us as the military wing of the Accounts Receivable department.
H-M
N-S
T-Z