Tabletop Game / Beyond the Supernatural 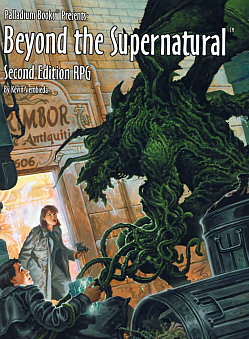 Beyond the Supernatural is a Tabletop RPG by Palladium Books. Unlike most other Palladium games, the setting is modern day, and the supernatural elements are toned down to the point that many monsters hide in plain sight. The genres the game covers are anything from horror to mystery, but are typically low key and not over the top action. The psychic abilities in the game are arguably the most developed of a Megaverse book, with more categories than the core Rifts or Palladium Fantasy games.

To date the game has also received one additional sourcebook called Boxed Nightmares that adds several brand new mysteries for players to investigate as well as a few other extras such as rules for creating paranormal organizations, a handful of new NPC characters and a (fake) newspaper galley featuring many strange articles on the supernatural.