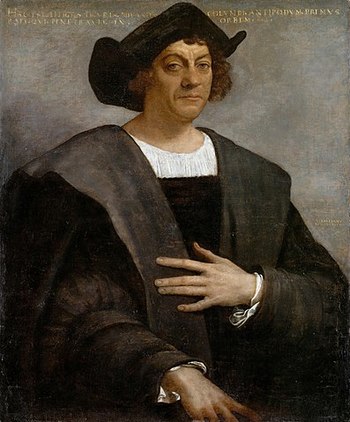 Columbus probably looked nothing like this.
Columbus sailed the ocean blue
Back in Fourteen-Ninety-Two.
He sailed across and spotted land,
A beach, and people on the sand.

He called them Indians because
He had no idea where he was,
India was just a guess.
When in doubt, declare success.
—Ramon Montaigne
Advertisement:

Christopher Columbus (Italian: Cristoforo Colombo, Spanish: Cristóbal Colón, Portuguese: Cristóvão Colombo), born circa 1451 and died 20 May 1506, is a famous historical figure, known as the sailor who wanted to find an easier trade route from Europe to Asia (NOT to prove the Earth was round, contrary to popular belief) only to discover the Americas during his travels.

As you probably know, he was not the first European to discover the Americas note The credit goes to Leif Erikson and the Vikings some 500 years before Columbus. Ultimately their settlements at L'Anse aux Meadows in Newfoundland (Canada) failed and were largely forgotten until more recent times., but it was his efforts that led directly to the the Colombian Exchange, through which European exploration colonization shaped the Western Hemisphere, and with it the entire world, into its current form. An inestimable boon for the nations of Europe, though considerably less advantageous for the American indigenous natives (albeit mostly for reasons not intended by anybody).

On his most famous voyage, the 1492 transatlantic trip in the ships Niña, Pinta, and Santa Maria,note These were not the actual names of Niña and Pinta, but the crew's nicknames. Spanish ships at the time were generally named for saints, and Niña's real name was Santa Clara. Pinta's real name has been forgotten by history, but the nickname is short for "la Pintada" (literally "the painted one" but in context "the prostitute"). he was searching for a route to "India", which at the time meant Asia—specifically, he was hoping to find Japan. When he finally reached land, all he could tell was that the natives were neither Japanese nor Chinese, and so he was at a loss to figure out where he really was. Figuring he'd landed on some previously-unknown part of Asia, he referred to the natives generically as "Indians", and the island chain as the "East Indies". (Today, we've corrected this second mistake, and refer to these islands as the West Indies.) On his third voyage, in 1498, he realized he'd found a hitherto-unknown continent (South America), but he never learned that he hadn't come close to reaching Asia.

Nobody today is sure what he looked like; the picture here, painted after his death by someone who never met him, shouldn't be taken as fact. For one, he had auburn hair in his youth which would have turned white by the time he was the age depicted.

Columbus was born in October 1451, before the 31st. He was born in Genoa, which was a maritime republic. His father was a middle class weaver who also sold cheese, but his brother worked in a cartography workshop. In 1473, he began his apprenticeship as a sailor for a merchant family. He sailed to the Genoese colony of Chios. After that in 1476, he was a sailor in an armed convoy sailing from Genoa to Bristol, England. After that, he might have even sailed to Iceland in 1477. In the fall of 1477 he sailed to Libson, Portugal. There, he met up with his brother and based himself there. He married and had children. Between 1482 and 1487, Columbus sailed along the west African coast to the Portuguese colony of Elmina. His wife died, and he started dating a twenty year old orphan. He taught himself Latin, Castilian, and Portuguese, and he read up on astronomy and on the travels of Marco Polo and John Manderville.

He and his brother Bartholomew together conceived of an "enterprise of the Indies", a way to sail directly to the Orient without having to go through the Turkish-controlled land route or the very long route beyond Africa. Columbus argued that the world was smaller than what common scholarship held, and that Japan was very, very far east of China, which was in turn very, very far east of where it actually was. He believed the world was smaller than it was because while he was sailing in the Portuguese Canary Islands, he would often hear rumors of driftwood floating over from west. So while he was right in assuming something was close by, he was wrong in thinking it was Asia. He was right on one more count though, that the "Easterly" winds off the coast of Africa could propel a sailing ship a great distance in relatively little time.

He went to Portugal in 1485 and presented his plan, along with a demand that he be made "Great Admiral of the Ocean", appointed governor of any lands he discovered, and received 10% of revenue derived from anything he found. The Portuguese flatly rejected his proposal, and the English simultaneously rejected a similar proposal made by his brother. Then Columbus went to the Spanish, who held a similar opinion but decided to keep him around by paying him not to go anywhere else. This was in 1489.

In 1492, hurting for cash after defeating Muslim Granada, Ferdinand and Isabella decided to give him what he wanted (although Isabella initially turned him down). Most likely, Ferdinand didn't think he'd come back. However, Columbus was an experienced sailor and was fully aware that the trade winds could carry across the Atlantic with ease. While many would say that Columbus just got lucky, in actuality his feat was impressive. He had to sail in open waters for over a month (longer than anyone else in history up to that point) and had to quell his mutinous sailors who knew less about geography and were afraid they were too far out from land. Eventually, against the odds, they reached land.

He landed first in the Bahamas, and the natives he met there were peaceful. However, not all natives were Noble Savages.

After returning to Spain, Columbus was given 1500 men and 14 ships, and sent back to set up a colony. After it was set up, he left his brother in charge to explore more. In his absence, the other Spaniards brutalized the natives and he was blamed for it. He was sent back to Spain in chains, but Queen Isabella soon had him released. Though his property was returned to him, he did not get his governorship back. He explored more, landing in Venezuela and sailing along the Panama coast in search of a strait from which he could dial to Asia, but found none.note You probably know that the Panama Canal was man-made and opened in the early 20th century, four centuries after Columbus.

Many historians have credited Columbus for the European colonization of the Americas, which involves many Europeans battling each other for colonies and land in the New World, looting and destroying many tribes for gold and valuable resources, massacres of populations to take their land, and forced destruction of native cultures. Most Indian victims however were claimed by the European diseases, which their immune systems could not handle. Although obviously, how the Europeans approached the New World and the Native American tribes varied. note The Spanish and the Portuguese ruled over and mixed with the natives; meanwhile, the French and Dutch were less interested in taking control of the natives lands and more establishing lucrative trading relationships with them. The English were mostly fleeing from political persecutions in their home country, and intentionally separated themselves from neighboring native tribes. It should be noted that most of the atrocities occurred after Columbus arrived, so people blaming them on him might not be entirely fair. For much of the 20th century, Columbus Day was a popular holiday celebrated in many New World countries on October 12th, though as modern sensibilities bring more light to Columbus' true nature, the tradition has begun to be downplayed (in some parts the United States, it's taken on the new name of Indigenous People's Day, for obvious reasons).

Columbus's descendants hold the Spanish noble title Duke of Veragua, and the hereditary title of "Admiral of the Ocean Sea". Both the current Duke and his father were named Cristobal Colon (Christopher Columbus) and the father was actually a naval officer, which means he was an Admiral even when he was a Lieutenant.