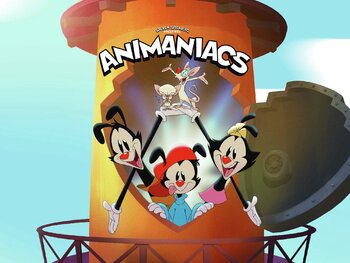 After 22 years, they're back and zanier than ever!note Counterclockwise from left: Yakko, Wakko, Dot, Pinky and The Brain
What's going on? Will we be okay?
Has it all gonе mad since we went away?
Oh, updatе us, please, and put us at ease
'Cause we've run out of jokes about the '90s!
— The Warners, "Suspended Animation"
Advertisement:

Animaniacs, also known as Steven Spielberg Presents Animaniacs, is an American animated musical satire sitcom that serves as a revival (though often called a "reboot" in-and-out-of-universe) of the 1993–1998 animated series of the same name. With a change of audience, the humor is better suited to fit The New '10s and The New '20s.

On January 4, 2018, Hulu picked up the streaming rights for the original Animaniacs, Pinky and the Brain, and Tiny Toon Adventures while ordering two new seasons of Animaniacs direct to series. The revival's first thirteen-episode season premiered on November 20, 2020, with the Warner Siblings and the fan favorite Pinky and the Brain returning as the two main recurring segments. On February 25, 2021, before the second season had even been released, the show was greenlit for a third season. The second season was released on November 5, 2021.