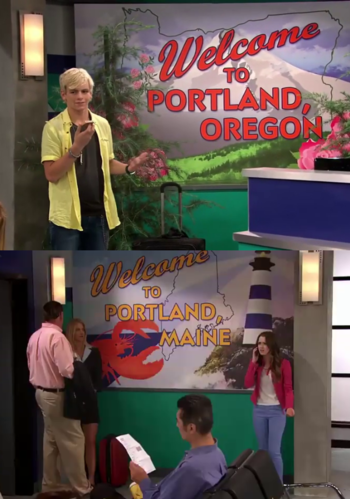 "There are two Portlands?! Why would they do that?!"
Sky Masterson: We're going to my favorite restaurant. El Cafe Cabana. [In] Havana.
Sarah Brown: [shocked] Havana, Cuba?
Sky Masterson: Well, what other Havana is there?
— Guys and Dolls
Advertisement:

London, England. In case you confused it with London, Ontario.

There are a great many American cities and towns named after places from Europe: mostly British places, but French, German, Spanish, Portuguese and Dutch names crop up across the USA, not to mention numerous variations and simplifications of Native American spellings. This reflects the USA's origins as being colonized by people from across Europe. Interestingly enough, lots of major American cities are far bigger than their European counterparts ever were (Cleveland, Boston, Stockton, Rochester, York/New York, and Portlandnote  Strictly speaking, Portland, Oregon, was named after Portland, Maine, not the one in England. are the most obvious examples, and the only two major exceptions are Birmingham and Manchester).

But let's look at a number of American places in comparison to show how common this is. Odessa, Ukraine and Odessa, Texas; Vienna, Austria, and Vienna, Virginia; then there are duplicate cities, e.g. the much older and smaller city of Las Vegas, New Mexico is almost completely ignored compared to Las Vegas, Nevada, while Wilmington, North Carolina is about the same size as Wilmington, Delaware. There are so many examples that some non-examples are often confused for examples, such as the independent (ex-Soviet) republic of Georgia and the U.S. state of Georgia, which was actually named for King George II.

Unfortunately, this results in some confusion and frustration for many Americans. Since the USA is big and—though sparsely-populated—home to quite a few cities, and many of these cities have similar if not identical names (for instance, there are thirty-two states that have a city named "Springfield" and twenty-seven settlements named "Canton"), Americans often describe an American location as "City Name, State",note Postal authorities in some countries, not just the US, require such usage. and describe a foreign location as "City Name, Country" to parallel thatnote Come on, did you really expect Americans to know about other countries' first-level subdivisions and what cities they have?. This works well in the USA, but becomes rather jarring and annoying for foreigners, who find it annoying that after being shown Tower Bridge (itself not to be confused with the same named, but golden bridge in Sacramento, California), the Houses of Parliament, and St. Paul's Cathedral all in one shot, they still need to say "London, England".

In France, the tendency is to ram the identifier into the town name itself, so one gets places like Sainte-Marie-sur-Mer and Sainte-Marie-de-Ré and Sainte-Marie-des-Champs, etc. However, there are also over a dozen places called just plain Sainte-Marie in France alone; here you would have to specify in which département the one you mean is situated. The English equivalent would be, say, "Springfield-in-Massachusetts" and "Springfield-on-Black-River". Some British towns, such as Newcastle-upon-Tyne, Stratford-upon-Avon, Ashton-under-Lyne, and Kingston-by-Ferring, follow this scheme as well, as do German-speaking towns and cities Neustadt an der Aisch, Neustadt am Rübenberge, Neustadt in Holstein, and Neustadt an der Weinstraße (four places called "new town" named respectively after a river, a hill, a province, and a scenic route). Canada follows the British model in a few places, notably Niagara-on-the-Lakenote that is, Lake Ontario, so-called to distinguish it from Niagara Falls down the road. The US is home to Washington-on-the-Brazos in Texas and Geneva-on-the-Lake, Ohio (the lake in this case being Erie), which distinguishes it from plain old Geneva, Ohio a few miles southnote  and, by extension, the original Geneva (both the canton and the city) in Switzerland, which, of course, is helpfully on a lake (Lac Léman).

The Japanese equivalent is to rename a town or city that shares its name with a more famous counterpart so that it also includes the name of the ancient province. Nagano City in Osaka had the same name as that other Nagano (the one with all the skiing, in the prefecture of the same name), so they changed it to Kawachi-Nagano. Happens a lot with similarly-named train stations, too.

A slightly different form is sometimes used: Americans from small towns will usually specify their state simply to give a general idea of what region they're from. If someone says he is from Miamisburg, Ohio, it isn't because there's another Miamisburg out there (there isn't, as far as we know), but because people from other states have no idea where in the world Miamisburg is. The foreign equivalent might be for someone from a small town to give the name of the nearest major city.

Gets used in the Title In a lot. An example of Creator Provincialism. Often mocked, although it's still a popular trope. Named by Bill Bryson. The Other Wiki

In case you were wondering, aside from London, England there are at least 26 cities, towns, or villages whose full name is "London". note One each in Belize, Canada (Ontario), Equatorial Guinea, Finland, Kiribati and Nigeria; three in South Africa; seventeen in the United States (in various states). There are many more such communities with "London" as part of their name and at least 2 London Islands (both in Chile; one is also known as Cook Island to alleviate confusion).