Radio / As It Happens 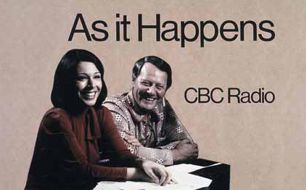 "As It Happens: Radio that's a real troper."

This long running Canadian radio show on CBC Radio One tackles news around the world, specializing in obscure but amusing news stories and giving alternate viewpoints on bigger stories. Their key feature is that they always use outgoing telephone interviews with newsmakers, as opposed to using their main studio for visitors or communicating with their secondary facilities. With humble beginnings in 1968 as What's New in Saskatoon?, the show eventually changed its name and jumpstarted the careers of radio legends like Barbara Frum. Eventually a same-day hour-long edition was syndicated to the United States, where it airs on public radio stations in the northeast and Midwest.

It is currently hosted by Carol Off and Chris Howden. Its traditions include an annual Christmas Eve (or the closest Friday night broadcast if the occasion is on the weekend) reading of The Shepherd by Frederick Forsyth by the former host, the late Alan Maitland.