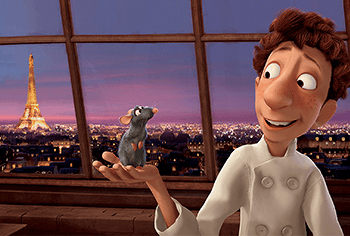 Get an Eiffel of that tower!
"The Eiffel Tower can be seen from ANY window in Paris!"
— "Hollywood Rule Book"

Some cities are renowned for their industries. Hollywood makes movies, Detroit makes... made cars. Others are known as hotspots for the scientific community, like Geneva. Or for the political community, like... Geneva. And in some places, there is a landmark. Such as Geneva.

A few of these landmarks, in various locations around the globe, are so well-known by so many people that they've come to function as a sort of visual shorthand for the city, sometimes the country, in which they're located to the point where some footage of the landmark in question must be portrayed on the screen, even when that landmark is irrelevant to the plot and nowhere near where the characters are supposed to be. The National Mall in Washington, D.C., Westminster Palace (specifically, its clock tower housing Big Ben) in London, the Taj Mahal in India, St. Basil's Cathedral in Moscow (occasionally mistaken for the nearby Kremlin), the Sydney Opera House in Sydney, the Tokyo Tower in Tokyo, The Colosseum in Rome, the Sistine Chapel for Vatican City... When these locations are portrayed in a film or TV show, expect numerous, panoramic establishing shots of the landmark in question. Occasionally, these landmarks will be visible out of windows or from rooftops where viewing them in real life would be geographically impossible, or in historical settings when they weren't actually built yet.

Iconic structures such as these can also function as Red Shirts. If they are ever destroyed, then circumstances have become dire indeed. Which naturally means that in a disaster movie, the landmark in question will probably be doomed to certain destruction. The Hollywood sign and the Statue of Liberty are popular targets for CGI catastrophes. Alternatively, the structure will be one of the few things left intact After the End, either mostly undamaged, to give the characters some kind of hope for the future, or nearly collapsed, as a testament to how much has been lost.

This trope is not simply here to list various landmarks around the world, but rather instances of landmarks in fiction used as a shortcut to showing either where the action occurs or how bad things have gotten.

Can overlap with both Scenery Gorn and Scenery Porn, depending on how lovingly and lavishly the landmark in question is filmed. Often combined with Time Zones Do Not Exist if the landmark is shown in a view from another country at the same time in both places. For instances where entire countries, or more, are represented by the landmarks of only one city, see Britain Is Only London. Compare Landmarking the Hidden Base, where a major HQ is situated inside or underneath one of these monuments; Rushmore Refacement, where they are deliberately altered; Weaponized Landmark, where they're turned into Weapons Of Mass Destruction; and Monumental Damage, where they are damaged or destroyed, possibly as a result of a Monumental Battle. (And Monumental Damage Resistance, when they survive a disaster.)

This trope is useful for works with an Informed Location, as using the landmark in a Title Sequence is a quick and easy way to establish a setting with little other effort.

The trope namer is on the Champ de Mars in Paris and was completed in 1889. The Other Wiki calls the Eiffel Tower "one of the most recognizable structures in the world." Part of this is due to the fact that there was a strict building code of no buildings over a certain height in Paris, so that the Tower is seen from farther away than it would have been had it been built in, say, New York City.

For its historical equivalent, see "Mister Sandman" Sequence. This trope is not to be confused with the Washington Monument Syndrome.

note That is when government agencies facing budget cuts will direct those cuts at their most visible symbols or appreciated services in order to highlight their utility to the public and put pressure on lawmakers to reverse the cuts. The term was coined in 1969 after George Hartzog, the director of the National Park Service, ordered some of the US' most visited national parks, such as the Washington Monument and the Grand Canyon, closed for two days a week in a successful bid to convince Congress to restore the NPS' full funding.