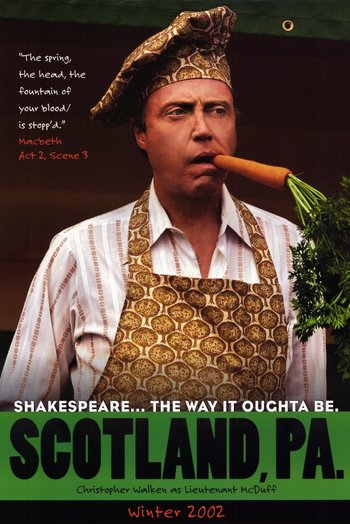 "We're not bad people, Mac, we're just... underachievers that have to make up for lost time."
— Pat McBeth
Advertisement:

It's 1975, and in the small Central Pennsylvania town of Scotland, Joe "Mac" McBeth and his wife Pat are too old to be flipping burgers at Duncan's Cafe. Both of them receive a brief vision of what life would be like with Joe as the head of the restaurant; naturally, Pat decides the best way to accomplish this is to kill Duncan and make it look like a robbery. So that's what they do.

Under new management and a new name, the restaurant does great business. But forces, internal and external, threaten to tear everything apart. Banko, Mac's best friend, and Lt. McDuff, the detective investigating Duncan's murder, both have their suspicions about the local fast-food king and queen, while the happy couple themselves are driven mad by their guilt and paranoia.

That's right, you've seen this story before. It's The Scottish Play, only this time it's in rural Pennsylvania in the '70s, and it's all played for laughs.

Incidentally, there really is a village of Scotland in Pennsylvania. It's along I-81 about 50 miles southwest of Harrisburg.

In addition to the tropes in the source material, provides examples of: