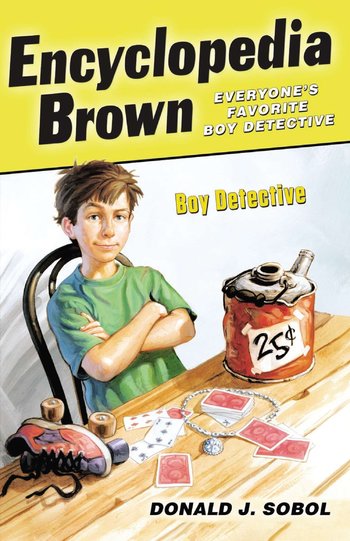 "I wouldn't believe him if he swore he was lying."
— Encyclopedia Brown
Advertisement:

Encyclopedia Brown is the Kid Detective hero of a series of children's stories written by Donald Sobol. He uses his intelligence and formidable memory for trivial facts to solve a wide variety of mysteries. The Encyclopedia Brown stories are essentially a kids' version of Sobol's earlier series Two-Minute Mysteries featuring the police detective Dr. Haledjian. A number of Brown cases are directly taken from Two Minute Mysteries, albeit with the murders solved by Haledjian being (mostly) replaced with more humble crimes like bicycle theft. Like Two Minute Mysteries, most Encyclopedia Brown stories revolve around our detective spotting an inconsistency or impossibility in the guilty party's alibi.

Leroy "Encyclopedia" Brown is the son of the Chief of Police in Idaville, who one day reveals an uncanny ability to crack cases using his deductive skills. Once a book he helps his dad solve a serious case at the dinner table, and the rest of the time he runs a neighborhood detective agency to help the local kids with their own troubles. His eternal rival is Bugs Meany, a local bully with his own posse of troublemakers, the Tigers. Encyclopedia's friend (and bodyguard) is Sally Kimball, a Cute Bruiser whom even Bugs fears. Another recurring enemy is Wilford Wiggins, a high school dropout who is constantly trying to con the neighborhood kids into buying bogus products or merchandise. Encyclopedia, Sally, and Bugs all agree that they hate him.

It was adapted into a short-lived HBO series in 1989 (when an original HBO series was more likely to be a kids' show). There was also a newspaper comic syndicated from 1978-80.

The last book of the series was posthumously published in October, 2012, three months after Sobol's death.

The books provide examples of the following tropes:

The HBO series also provides examples of the following tropes: