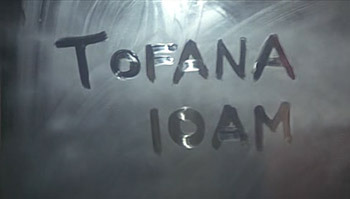 A classic way for an investigating character to discover a hidden message is when it's been written/drawn invisibly onto a window or mirror with someone's bare fingertip. Imperceptible under dry conditions, such a message will be revealed if steam is allowed to build up near it, causing condensation to fog up the glass everywhere except where fingerprint-grease adheres to its surface.

Occasionally used to convey a message between two characters who are present at the same time, but either can't or won't speak aloud. In such cases, grime on the glass can serve the same purpose as condensation. Also occasionally seen in a Haunted House, presumably because ghosts have an easier time manipulating condensation than writing implements.

This trope is commonly used in bathrooms, where mirrors are found in close association with showers and sinks as sources for steaming-hot water. Only rarely will any marks besides the crucial clue appear, which can raise Fridge Logic issues if the surface in question hasn't been cleaned since it was last handled, so logically ought to have previous (random) finger-marks on it.

A family-friendly sister trope of Couldn't Find a Pen. An Ice Person may use frozen condensation to leave messages this way, etching them in frost. Often a subtrope of Invisible Writing, and a sister trope of Writing Indentation Clue.