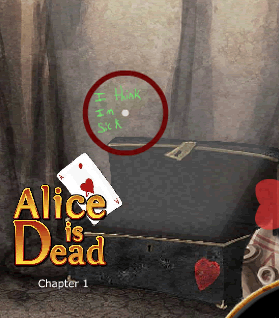 Alice Is Dead is a popular Flash game trilogy on Newgrounds, made by Lorestrome Games, known for breathing new life into the tried and true Grimmification of Alice in Wonderland, as well as for its beautiful drawn artwork, creepy and cinematic music, and for its mix of old school Disney movie wonder and creepiness with gritty horror. If you trust your nerves, go check it out:
Advertisement:
(the theme song can be downloaded here

The plot is well known for being extremely convoluted, yet rewarding, with secrets laced throughout all three games. A Q&A explaining much of it can be found here

, so beware of the spoilers. Despite the author claiming there won't be a sequel, a strange post

has surfaced on Newgrounds, showing a battered and bloodied rabbit next to the dead grass field and tree glimpsed in Episode 2.

In 2021, Alice is Dead: Hearts and Diamonds was revealed. It's a complete remake of the trilogy with the added addition of new entries in the series via episodic releases. It is currently set for release on Steam sometime in the future, with a demo of the first game's remake available for free.

Not to be confused with the podcast Alice Isn't Dead.

Tropes found in the games: