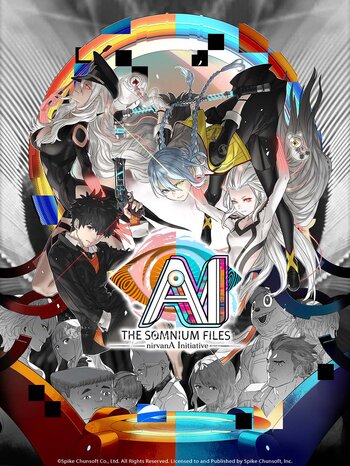 Fray to Free.
Lonely girls across the world, let's wake up and fight!
Worlds apart with beating hearts unite the light through the night!
If the boys want to reach us they'll have to keep up.
Without you, I am only half
I need to be whole.
— The chorus of Half to Whole, performed by Kizuna Chieda (English version).
AI: The Somnium Files - nirvanA Initiative is the sequel to AI: The Somnium Files, developed by Spike Chunsoft and written by Kotaro Uchikoshi under the newly formed development team "Team Zero Escape". It was released on June 24, 2022 for
Advertisement:
PlayStation 4, Xbox One, Xbox Series X|S, Nintendo Switch and PC via Steam.

Three months have passed after the New Cyclops Serial Killings. Jin Furue, the 29 year old CEO of Music Food Inc. was found dead in the middle of a quiz show, bisected from top to bottom, with only the right half of his body left at the crime scene alongside a sign with a QR code linking to a strange video, before bursting into flames. Six years later, the left half of Jin's body suddenly appears with no signs of decay in the middle of a sports stadium. Now it's up to Mizuki Okiura and Date's former partner Aiba to solve the bizarre Half Body Serial Killings. Meanwhile, an unknown conspiracy known as the "Nirvana Initiative" starts to emerge...

The game is set between two different scenarios: "Side Mizuki", where you play as the returning Mizuki, now a 18 year old girl working at ABIS with Aiba, where they work together to solve the Half Body Serial Killings six years in the future and "Side Ryuki", where players takes control of Kuruto Ryuki, a newly recruited special agent and his new AI partner Tama, set during the three months after the events of the first game.