You All Meet in a Cell 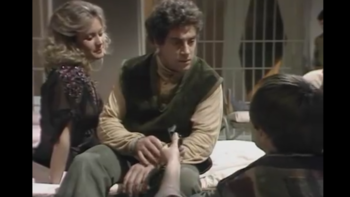 The beginnings of a Ragtag Bunch of Misfits
"When will the authorities of Tamriel learn? If you keep locking people up for minor adventure-related crimes, they'll just be surrounded by other adventurers and be more likely to adventure again when they get out."
— Ben "Yahtzee" Croshaw, Zero Punctuation on The Elder Scrolls V: Skyrim
Advertisement:

This is kind of like You All Meet in an Inn, except instead of the protagonists beginning in an inn, they start off in some form of captivity. The characters must then escape imprisonment, and explain to each other (or find out) why they were imprisoned in the first place.

This trope provides the writer with several useful things: an immediate character goal ("get out of here"), a reason for a disparate group who normally wouldn't work together to do so, and time for that squabbling group to actually bond with each other.

Similar to a Closed Circle, and a common way to Gather Characters. Can lead to the Great Escape, Boxed Crook, or Condemned Contestant. May be used to justify a No-Gear Level. Compare Conveniently Cellmates.