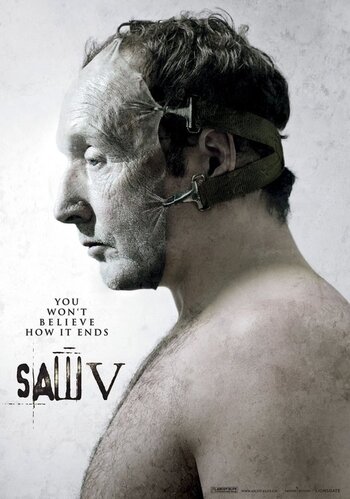 In the end, all the pieces will fit together.
Advertisement:

Saw V is the fifth film in the Saw horror film series, released on October 25, 2008 and directed by David Hackl, who had previously worked as the production designer for Saw II, Saw III and Saw IV, as well as a second-unit director for the latter two films.

Following Jigsaw's death, Detective Mark Hoffman has revealed himself as one of the notorious killer's apprentices. After saving a young girlnote Corbett, the kidnapped daughter of Jeff Denlon and seemingly escaping one of Jigsaw's traps, he is hailed by the public as a hero and credited with closing the Jigsaw case for good. However, after a brief but effective encounter with Hoffman, FBI Agent Peter Strahm becomes driven to pursue Hoffman and eventually out him for who he truly is.

At the same time, with Jigsaw's threat that he will not go untested in the back of his mind, Hoffman seeks to continue his legacy and maintain his anonymity by any means necessary. The film also delves a good part of its runtime into Hoffman's backstory, explaining how he became a Jigsaw apprentice.

Meanwhile, five people find themselves in an unknown location as the unwilling participants of Jigsaw's newest game, where he implores them to work together to survive.