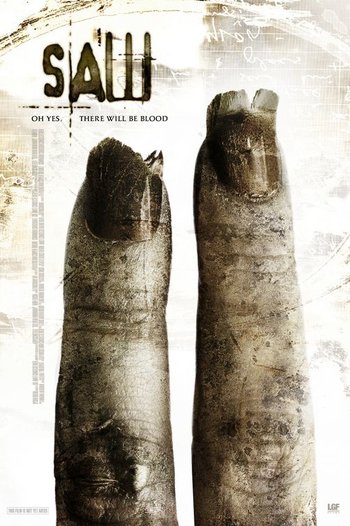 "Oh, yes... there will be blood."
— Jigsaw
Advertisement:

Saw II is the second film in the Saw horror film series, released on October 28, 2005 and directed by series newcomer Darren Lynn Bousman.

Set some time after the first movie, the police manage to track Jigsaw's location and, after a raid, finally have him cornered. However, Jigsaw reveals that there is another game currently in place in a secret location involving a group of people stuck in a building not only full of deadly traps, but filling with a nerve gas that they must find the antidote for before it slowly kills them.

Jigsaw reveals he'll only tell them their location if one of the officers, Eric Matthews (Donnie Wahlberg), plays a game with him. Eric finds himself having no choice but to do so when he discovers that his son's life is on the line as one of the participants of the other game's location.

Series co-creators James Wan and Leigh Whannell were busy working on Dead Silence at the time that the sequel was greenlit, which freed up the director's chair. Bousman was recruited by the Saw crew as he was trying to sell a self-made script titled The Desperate, which ended up becoming the foundation for Saw II, with the characters, traps and deaths transferred directly, and Leigh Whannell providing some rewrites to further polish the script.

A short film titled The Scott Tibbs Documentary was featured as a Bonus Material in DVD releases of the film. Taking place after the film's events, it follows Scott Tibbs, the frontman of in-universe band Wrath of the Gods who wants to make a documentary about Jigsaw after the learning about the disappearance of his best friend Adam Stanheight (from the first film).