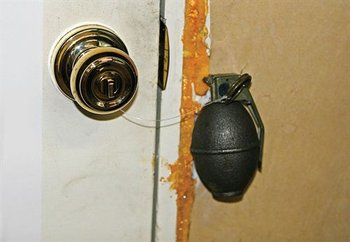 An explosive surprise.
"Like new parents, spies take preventative measures to ensure a safe environment. Only instead of baby-proofing cabinets and electrical sockets, they use more extreme methods."
— Burn Notice
Advertisement:

A version of the Death Trap, except instead of the good guys being put into it, they have to somehow get past it to achieve their objective. Such devices will usually gruesomely kill the first Red Shirt sent into it before the hero correctly figures out how to get past.

Otherwise, most such traps act in exactly the same way as Death Traps. Explosives are a particular favorite, as they will also destroy the installation involved. Expect a retreating character to trick a pursuer into it. Naturally a feature of the Death Course and Temple of Doom. The Trap Master has this as an M.O. and will plant such traps at every opportunity.

Also, please note that while some good guys and definitely the audience knows when and where the booby trap is, most characters just don't have these privileges. Unless they feel compelled to do things the "right" way. Booby traps, being indirect weapons, are not very discriminating about who they go off on, and are just as likely to hurt someone that you don't want hurt (or even yourself) as your enemy.

Obviously, Truth in Television. Keep in mind, however, that in most countries booby traps are illegal and if they kill someone you'll likely face jail time. This includes incidences of home invasion by a thief.

Compare and contrast Trick Bomb. If you're looking for that other kind of Booby Trap, see Marshmallow Hell.

Instead of finding a body, detectives Makimura and Taki find an explosive surprise.

Instead of finding a body, detectives Makimura and Taki find an explosive surprise.