Film / Aguirre, the Wrath of God 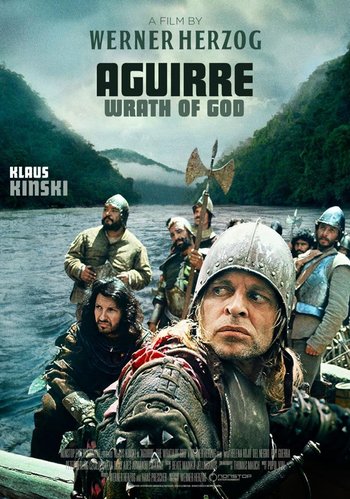 When the going gets tough, the tough get going. No matter what, never give up!
"I am the wrath of God. The earth I pass will see me and tremble."
Advertisement:

Aguirre, the Wrath of God (Aguirre, der Zorn Gottes) is one of Werner Herzog's first films, released in 1972. It is Very Loosely Based on a True Story, that of Lope de Aguirre, a 16th-century Spanish conqueror that explored the jungles of South America. At the start of the film, a large expedition under Gonzalo Pizarro sends ahead a scouting party, consisting of Don Pedro de Urzúa, Don Lope de Aguirre (Klaus Kinski) and others. Of course, being alone in the jungle starts driving the people mad, and Aguirre above all.

The film kickstarted Herzog's career and was the first of several collaborations with Kinski. The filming was said to be a nightmare. This is the film that gave rise to the legend of Herzog directing Kinski at gunpoint when the actor refused to follow his commands. Herzog insists that the story is apocryphal, and that he merely threatened to shoot both Kinski and himself should the actor choose to quit the film.

Roger Ebert regularly listed the film on his top ten movies of all time.

Aguirre, the Wrath of God contains examples of: