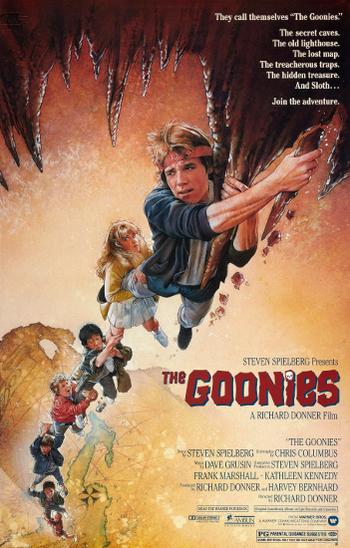 The Goonies, a 1985 adventure comedy film, is one of those ubiquitous pieces of The '80s fans hold fond memories of, even today.

A small group of kids living on the "Goon Docks" of Astoria, Oregon are in dire straits: the owners of a local country club have threatened their families' homes with foreclosure so they can finish building a new addition to said country club. On one of their last days in the neighborhood, one of the "Goonies", Mikey (Sean Astin), discovers a Treasure Map in his attic. The map supposedly reveals where to find the treasure of infamous pirate One-Eyed Willie — and it appears to lead somewhere underneath Astoria. Mikey and the rest of the Goonies decide to try saving their neighborhood by going after the treasure — but to get it, they must outwit a trio of mobsters and survive numerous death traps designed to keep One-Eyed Willie's treasure safe from outsiders.

In addition to a Novelization by James Kahn, the film also received a few licensed video games (The Goonies covers three separate games, and The Goonies II is a sequel to one of those games). A rumored sequel has been stuck in Development Hell since The 2000s.

The Novelization provides examples of: