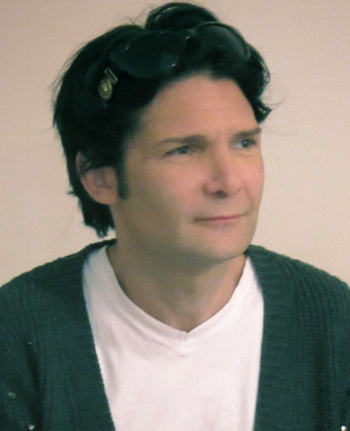 Corey Scott Feldman (born July 16th, 1971 in Reseda, Los Angeles) is an American actor and singer. He is best known for his acting roles in the 1980's, particularly in films with Corey Haim. Together, they were referred to as "The Two Coreys" and appeared in a number of primarily teen-oriented films together as child actors and remained good friends up until Corey Haim's death.
Advertisement:

After a period of success, numerous personal problems that included a strained family relationship and drug use led to Corey Feldman disappearing from the limelight, although he continues to work as an actor. In addition to his acting, Feldman doubles as a singer for his band Corey Feldman's Truth Movement. In more recent years, he has become a notable advocate for child victims of sexual abuse, as he revealed both he and Corey Haim were victims of pedophiles during the height of their Hollywood popularity.

He's become well-known in recent years for his musical output, which began in the early 90's and has continued to this day. His most recent album Angelic 2 The Core in particular attracted a lot of attention, becoming famous for its bewildering artistic choices and beloved as a prime example of So Bad, It's Good music.