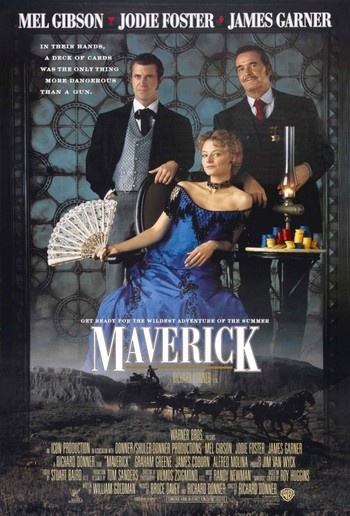 Maverick (1994) is a Western comedy film based on the 1950s television series of the same name, created by Roy Huggins. The film was directed by Richard Donner from a screenplay by William Goldman and features Mel Gibson, Jodie Foster, and James Garner.

Bret Maverick is a wisecracking gambler who wants to win a poker championship - only partly for the money, but mainly to prove once and for all that he's the best at poker. However, complications keep arising. First, he starts off $3,000 short of the $25,000 entry fee for the contest. His efforts to make up the difference spark off much of the plot, as well as diversions caused by, and in the company of, three people he encounters at Crystal River: an antagonist named Angel (Alfred Molina), a young con-artist calling herself Mrs Annabelle Bransford (Jodie Foster), and legendary lawman Marshal Zane Cooper (James Garner, who played Bret Maverick in the original TV series). The first two are also rival poker players.

The three share a stagecoach (whose driver dies at full gallop), agree to help a wagon train of migrant evangelist settlers who have been waylaid by ruffians (for a fee which Maverick in the end is too big-hearted to accept), and are headed-off by a troop of Indians (who, unbeknownst to his companions, are good friends with Maverick), who agree to help Maverick collect the rest of the fee (by swindling a Russian Grand Duke). After this, though, Maverick's adventures get a little crazy, especially since somebody has good reason to make sure Maverick never makes it to the poker game...

The film was nominated for an Academy Award for Best Costume Design. A soundtrack for the film, released on Atlantic Records, featured mostly original compositions by contemporary Country Music artists, and an all-star rendition of "Amazing Grace". One cut from the album, Tracy Lawrence's "Renegades, Rebels, and Rogues", was a minor radio hit in 1994, while Clint Black's #1 hit "A Good Run of Bad Luck" (also from his then-current album No Time to Kill) used movie clips in its music video.