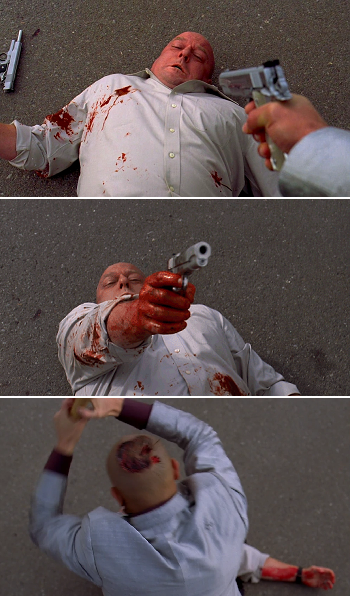 Phoenix Wright: ("Justified self-defense"... A plea usually reserved for when a person unintentionally kills in defense of himself. We could very easily make a solid case that it was self-defense, but...) The defense stands by the plea of "not guilty", Your Honor! (Because to plead "justified self-defense" is to say you did kill someone.)
— Phoenix Wright: Ace Attorney - Justice for All, "Reunion, and Turnabout"
Advertisement:

In many cultures, taking someone's life is considered one of the worst things you can do to a person, but there's one circumstance where it will often be considered justified: self-defense.

Enter Killing in Self-Defense, where an assailant is killed by whoever they were trying to harm. This can come in a variety of ways. Maybe the would-be victim managed to fight back and manages to kill their assailant in the ensuing struggle, or perhaps the would-be victim knew in advance that they would be targetted and took steps to outgambit the attacker. There are even cases where the victim had no intent to kill at all, and the death was purely accidental in nature. In fiction, and in real life, this sometimes results in a sentence for the Crime of Self-Defense.

Self-Defense Ruse is a variant, where a person pretends they had to kill someone (or stages a scene so it looks like they did).

If the assailant was out to kill the victim, then it's essentially Karmic Death at its finest.

Since this is a Death Trope, expect unmarked spoilers ahead!