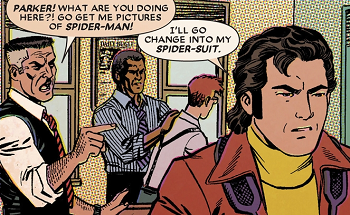 "I only tell the truth when it makes it sound like I'm lying."
— April Ludgate, Parks and Recreation
Advertisement:

Remember, kids, it isn't lying if you tell the truth in a sarcastic tone of voice!

The Main Characters are all trying to hold up the Masquerade, but the Nosy Neighbor is sniffing around, trying to figure out the secret. They won't settle for the standard excuses, and you can't convincingly make up something new on the spot. What's a Secret-Keeper to do?

Simple: Tell the truth, but in a tone of voice that suggests you don't mean a word of it. ("Yeah. Of course my roommate is a vampire. I'm so sorry I forgot to invite you to his coffin-warming party.") This usually will get them off your case, plus if they actually do meet your vampire roommate one day, they'll be less likely to take him seriously.

Of course, the danger of this trope is that the interrogator is Sarcasm-Blind. They could take your confession at face value and decide that they were right all along about your Masquerade. Oops!

Occasionally results in the trope user being hurt that no-one believes that they could have done what they sarcastically confessed to. It can also be used to lampshade the absurdity of the plot or setting.

See also Clark Kenting, Appeal to Audacity. Contrast with Cassandra Truth. A Cassandra Gambit is a large-scale non-sarcastic version of this. Compare You Wouldn't Believe Me If I Told You. Suspiciously Specific Denial can drift into this trope. The third type of Framing the Guilty Party may overlap. A particularly crafty character might use it as a form of Public Secret Message. It also may be a ploy for someone who's considered Too Funny to Be Evil. If the audience doesn't know it's a confession, this often acts a Rewatch Bonus. Compare and contrast "Just Joking" Justification.

Note that a Sarcastic Confession is one which the confessing party intends will not be taken seriously. Otherwise, it's an Ignored Confession.

We advise you to never try this in Real Life, particularly if you are being questioned by police. In some cases, the authorities in question are legally obligated to take anything you say at face value and act accordingly.