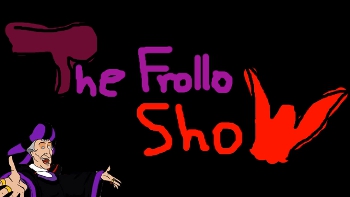 "Beata Maria, you know I will mindfuck the viewer."
—Frollo's very first line in the series.

The Frollo Show is a series on YouTube by Chincherrinas, starring the misadventures of perverted pyromaniac Frollo, from Disney's The Hunchback of Notre Dame. In these misadventures, he's usually accompanied by Gaston, from Beauty and the Beast, and Panty and Stocking. In his way are various villains, from Hitler to Hades. There's also characters based off foreign dubbed characters, such as a German Frollo and an Arab Gaston. A playlist of all the episodes can be found here

. The series concluded with the 21st and final episode, "Frollo Finally Does It (Last Story)", which was released on January 19, 2020.

The creator is also behind Smash Bros. Lawl.

The character sheet and recap page are both under construction. Please contribute if you will.

"Colonel William Guile... and Bison. The greatest friends in the world live in an apartment. And together, they will be amazing! LEET FIGHTERS!"
—The opening narration

Leet Fighters is a spin-off of The Frollo Show, starring Guile and M. Bison of the Street Fighter cartoon. Unlike in the original show where the two are enemies, they are portrayed as bros and get into wacky shenanigans. The series coincides with the events of The Frollo Show.

"And together, they will be amazing! LEET TROPERS!"

"Oh, come now, girl! After all we've been through, I'm so much more intimate with you now. Remember girl, this is your sanctuary."