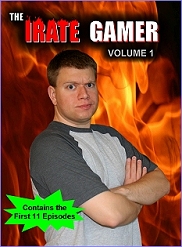 The Irate Gamer (real name: Chris Bores) is a Video Review Show hosted on YouTube, started in 2007. He plays the game while offering lots of very interesting history on both the game and the console, peppering his reviews with emphasis on the game's flaws, perceived or real, as well as a healthy dose of profanity and audacity. Like many others both before and after him, he also includes a mix of sketch comedy and special effects with at least tangential connections to the subject at hand — often times with a Story Arc between sketches. In short, he was considered one of the most prominent video reviewers to follow in the style codified by The Angry Video Game Nerd.

During his initial run, the Irate Gamer had a significant fanbase but also attracted much disdain for sloppy research, ill-timed humor, and plagiarism. His reputation led to parodies and memes often at his expense. The video series also went through a number of ups and downs, creating large gaps in time between content and a myriad of reboots, along with side series dedicated to newer games under the branding Irate Gamer Neo. In addition, he shot a few comedic rant videos and other material unrelated to video games. Despite his fluctuating release schedule, Bores maintained a fanbase throughout The New '10s.

After a decline in videos for many years, Bores retired the Irate Gamer in 2016 and focused on his other series Puppet Steve, which featured him reviewing toys and games via voiceover. He came back in 2018 as Chris Neo, sporting a retraux look and a more toned-down style, but this too was short-lived and gave way to a podcast titled Geek Time: The Next Generation.

Bores came out of retirement again in 2020. Reverting to the Irate Gamer name, he did a review of the Dick Tracy tie-in game for the Nintendo Entertainment System. Said video was done in collaboration with the Angry Video Game Nerd. Received positively by both reviewers' fandoms, this review drew in a myriad of new fans to both shows in the process. With this video, many who previously disliked the Irate Gamer grew to see him in a more positive light.

You can watch his series and other videos here

Chris recalls how his buddy Eric / Wise Sage had a cough for weeks.

Example of:
Incurable Cough of Death

Chris recalls how his buddy Eric / Wise Sage had a cough for weeks.