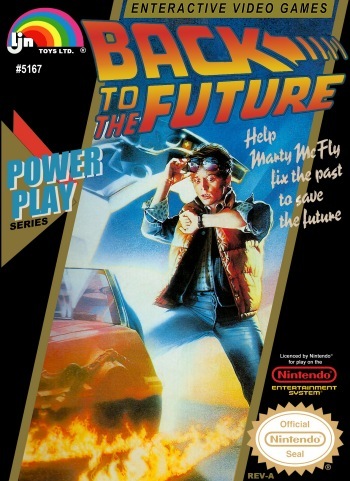 "It's almost like being in the movie!"
—The questionably-accurate tagline of the commercial
Advertisement:

The game begins with the plot of young Marty McFly being stranded in 1955, needing not only to get back to 1985, but also to get his parents George and Lorraine together before he goes back home. However, most of the game is spent traveling through the streets of Hill Valley collecting clocks to keep his family photo from vanishing entirely while avoiding bees, hula hoop girls, workmen, bullies, and even the natural obstacles of the streets. There are three places in Hill Valley that Marty needs to visit — Lou's Cafe, where he must throw milkshakes at Biff's gang to keep them from reaching the counter and throwing Marty out the door; the high school, where Marty must block Lorraine's hearts of affection that she sends towards him; and the dance, where Marty must catch flying musical notes with his guitar to build up the Love Meter so that George and Lorraine can have their first kiss. The final goal of the game is to get to the DeLorean and dodge lightning bolts while trying to get enough speed so Marty can travel back to 1985.

A sequel, Back to the Future Part II & III, based on the second and third films in the franchise, followed in 1990.

For the Telltale game, see Back to the Future: The Game.

Tough luck, Troper. It looks like you're stuck here.