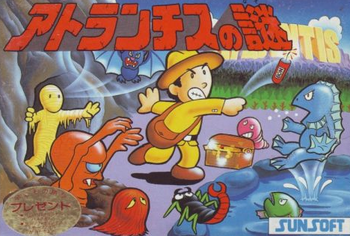 Atlantis no Nazo (Mystery of Atlantis) is a Platform Game released in Japan in 1986; it was the first game created by Sunsoft for the Nintendo Family Computer that was not based on an old Sun Electronics Arcade Game.

The game's adventure takes place on a mysterious island in the South Pacific, where a novice adventurer named Wynn is seeking to find his master. Wynn is equipped with bombs, which help defend him against enemies and uncover some of the doors that connect approximately 100 zones together.