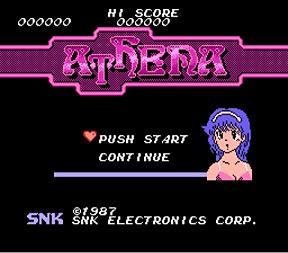 In the wake of Super Mario Bros, side scrolling platformers with bright colorful graphics proliferated, and such mascots as Wonder Boy and Kid Niki were born to the arcades. So SNK made their contribution to this genre with Athena, a goddess of wisdom sporting purple hair and a red bikini, who grows bored with living in her castle and takes a plunge into a fantasy world where everything is trying to kill her. The many possible different weapons and armors lying hidden in the worlds are key to victory.

Athena was released as an Arcade Game in 1986, and ports to the NES, Commodore 64, and ZX Spectrum subsequently appeared. The former was the most known version but that doesn't mean is a good one, until in 2011 SNK Playmore released SNK Arcade Classics 0, a compilation for PlayStation Portable with all pre-Neo Geo games in which Arcade version of Athena was included.

While Athena's future descendant, Athena Asamiya, appeared in Psycho Soldier and The King of Fighters, the original Athena would not appear in another game until the 2000s, when she appeared as a Guest Fighter in SNK vs. Capcom: SVC Chaos and NeoGeo Battle Coliseum as well in various other games for handheld consoles, included a Sequel for mobile (Athena: Full Throttle) which include a new character and a lot of Omake, making similar sprites, gameplay and even artwork as a homage to the original title.

The Other Wiki has an article about this game here

as well its sequel

. To see more about Athena Asamiya, the descendant of this Athena, take a look to Psycho Soldier and The King of Fighters.

Athena, its sequel and characters got these tropes appeared: