Video Game / At Least There Is Ceda Cedovic 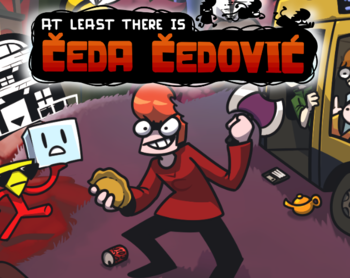 He's back. He's here. He's Čeda.
At Least There is Ceda Cedovic is a platformer game developed by LeatherIceCream, also the developer of Spears 'n' Spades.
Advertisement:

The game's plotline involves Ceda Cedovic, a Serbian boy who causes mayhem and is a part of the Poor 4. One day, Čeda, in his infinite wisdom, decides to try and become King of Counter-Strike. To do that, he needs to become the ruler of Hell, as the ruler of Hell is also the ruler of CounterStrike. It is very common knowledge, you see. Summoning a being from the Banished Realm known as Klempodrome, he starts going on a journey to kill Hell's king. But Hell isn't fire and brimstone here... it's way weirder.

At Least There is Čeda Čedović is a platformer game starring Čeda Čedović. The controls are fairly similar to Super Mario Bros. 3, with running, jumping, and diving being part of his moveset repertoire. Čeda can also consume various Power Ups to help with levels or kill any enemies. It can be downloaded from the official itch.io