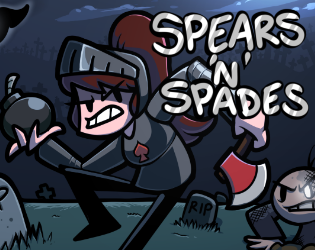 Spears 'n' Spades is an action Platformer released on Steam in 2017, with art and design by LeatherIceCream, programming by LazyTomato and Madvertiz0r, and music by mudeth and Mixdown Media.

You play as the knight Isabella Rosenschwarz, who must rescue her husband Harvey from King Nick, a demonic overlord who has gathered an army of zombies and demons to stop her journey to the church he has occupied, as well as corrupt the land he now rules.

Our heroine has accessed to a wide range of weapons that she can only hold one at any time, each having a different playstyle attached to it. Isabella wears a suit of armour that acts as a one-time hit absorber when picked up; otherwise, she has a single hit-point. She can also buy necklaces with different effects from a helpful shop-keeper.

The game, heavily inspired by Ghosts 'n Goblins, is divided into eight levels, each ending with a unique boss.