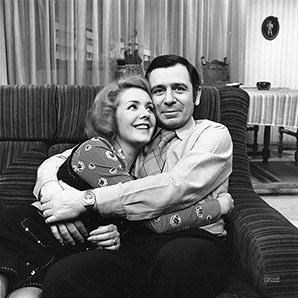 Stanislava Pesic as Olga and Vlastimir Stojiljkovic as Rodja.
Advertisement:

Pozoriste u Kuci or Theater at Home is a classic Yugoslavian TV sitcom that ran for five seasons from 1972 till 1984. It was a story about a working class family Petrovic. The patriarch Rodoljub Petrovic (Vlastimir Stojiljkovic) is a lawyer coming from a small village called Przogrnci. The wife Olga (Ljerka Drazenovic and Stanislava Pesic) is an architect and they have a son called Borko (Goran Trifunovic and Maro Brailo), there is also their maid posing as their relative for tax reasons called Tina (Ljiljana Lasic), but definitely the most memorable two characters are the-mother-in-law, old school lady called Snezana (Olga Ivanovic) and her friend with huge imagination called Vasa S. Tajcic (Dragutin Dobricanin) who is universally disliked by the rest of the family. The other characters involve: the landlord Ceda Mungos (Bata Paskaljevic), his cheating wife Rajka (Olga Stanisavljevic), Rodoljub's co-worker Tasa (Predrag Tasovac) and Rodoljub's mother from Przogrnci Vuka (Radmila Savicevic).