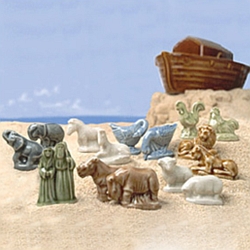 A kitsch collection in the shape of a different famous collection.
"They’re ornaments mostly! Most of them are little animals made out of glass, the tiniest little animals in the world. Mother calls them a glass menagerie!"
— Laura, The Glass Menagerie
Advertisement:

If the characters enter the house of an elderly neighbor or relative, they will inevitably find a hundred unblinking, soulless eyes belonging to... a collection of porcelain unicorns, a room full of Sad Clown paintings, or a much stranger collection. Adding to the quirkiness (or, at times, creepiness) will be the impeccable condition of the display, the sheer craftsmanship of the figures/displays, and the owner's utter devotion and Encyclopaedic Knowledge of every item's history.

This person - often an elderly woman, though some men and young people, especially Otaku, are depicted as having such collections - will usually create the collection to pass the time and fight the loneliness of a life removed from the joys of family, or as a symptom of oncoming senility. This curious collector will usually see their modest collection grow from a shelf to a bookcase to a Trophy Room, or even fill their entire house with this kitsch. The collection is usually harmless, rarely ever becoming as outright disturbing as the Stalker Shrine, but it can be cause for concern regardless, especially if it includes many a Creepy Doll.

The collection itself will be a big source of comfort and pride for the owner, which makes it a prime target for threats and coercion. If a character wants to persuade them to do something, he just threatens the porcelain puppy. If he wants to sweet-talk them, he'll compliment the miniature moose. And of course, if children are about or a statue gets broken, things will get much worse.

Needless to say, this trope is Truth in Television. Note that in Real Life, there may be a Values Dissonance; back in the 1930s, collecting figurines was both a status symbol and a symbol of femininity. The little old lady who has 300 figurines may not be pathetically lonely; she is following a tradition of her childhood.

Kitsch Collections that can be viewed by the general public probably fit best under Museum of the Strange and Unusual. If the collection is specifically of cute things, it may belong to a Glurge Addict. See also Crack is Cheaper (for when collecting gets expensive).

Javi shows off his collection of memorabilia and props from Nicolas Cage's movies.

Javi shows off his collection of memorabilia and props from Nicolas Cage's movies.